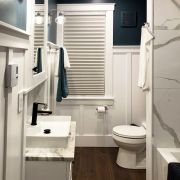 Most of this 1910s home was renovated sometime in the 1990s and hasn’t been touched since. When the new homeowners moved in, the bathroom was the first space they wanted to tackle. 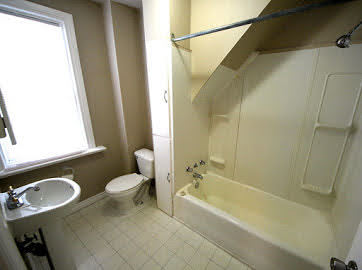 The layout stayed mostly the same, with the exception of the door location. Plumbing was adjusted so that the bathtub faucet and shower faucet were located on the same wall. The storage cabinet between the tub and toilet was removed to make more space for the new toilet, and the pedestal sink was replaced with a recessed custom vanity. 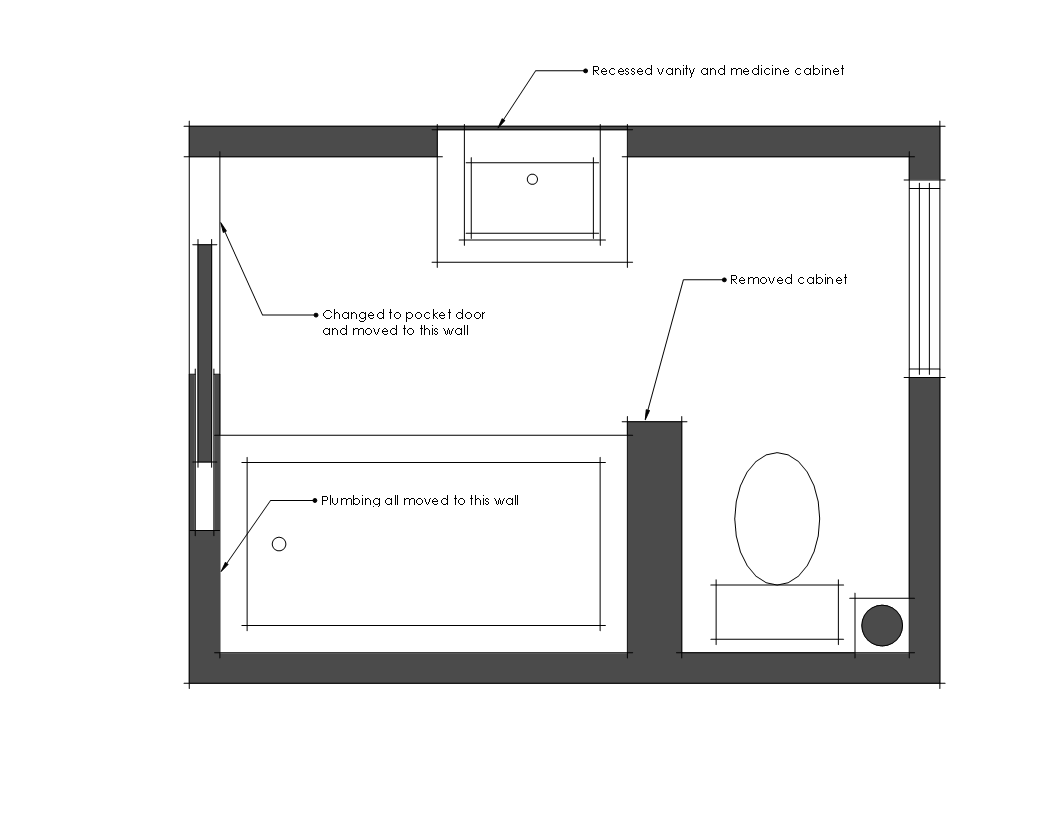 The room was totally gutted in order to properly insulate the outside walls and ceiling, as well as to update the electrical. This proved to be very messy, as the original sawdust insulation was still in the attic, and the lath and plaster walls created a lot of debris. When the flooring was removed to place new subfloor, we found the joists had been improperly cut to install sewer lines. These joists were replaced and properly supported. 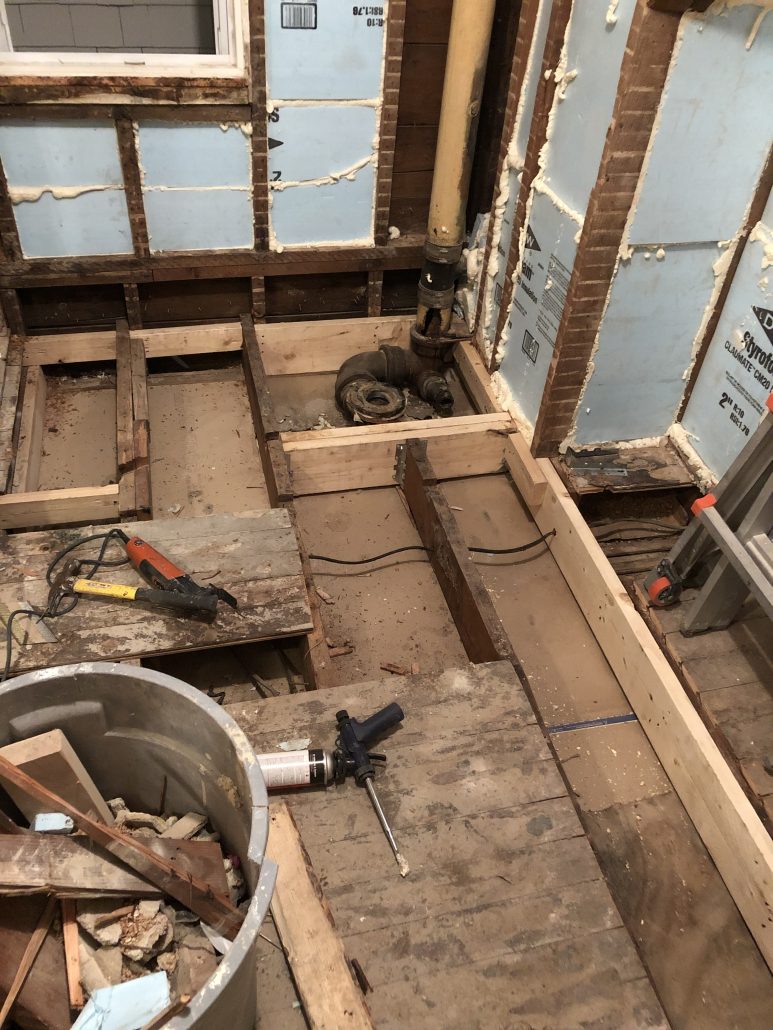 While the homeowners wanted to update the bathroom, they wanted to maintain a classic feel to the space to keep with the age of the home. Tall white wainscoting with a deep blue wall colour was selected to brighten the space and add character. A walnut luxury vinyl plank was used on the floor, with a large format marble tile on the walls. The vanity was custom built to recess into the wall, increasing the amount of storage space available. A large medicine cabinet was also recessed into the wall, with modern chrome wall sconces placed on either side. 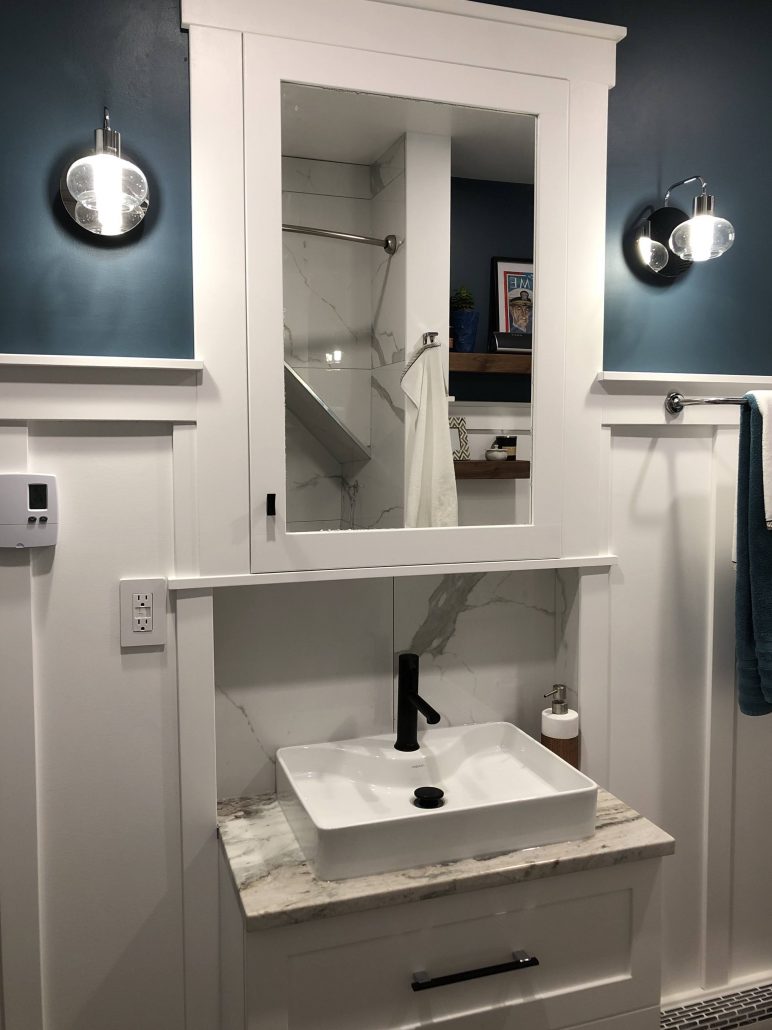 The shower features a chrome rainfall shower head and telescopic hand held shower head, as well as a recessed niche with granite shelves. Floating walnut shelves were installed above the toilet for decor, and the original vent stack was sprayed copper for a warm accent. 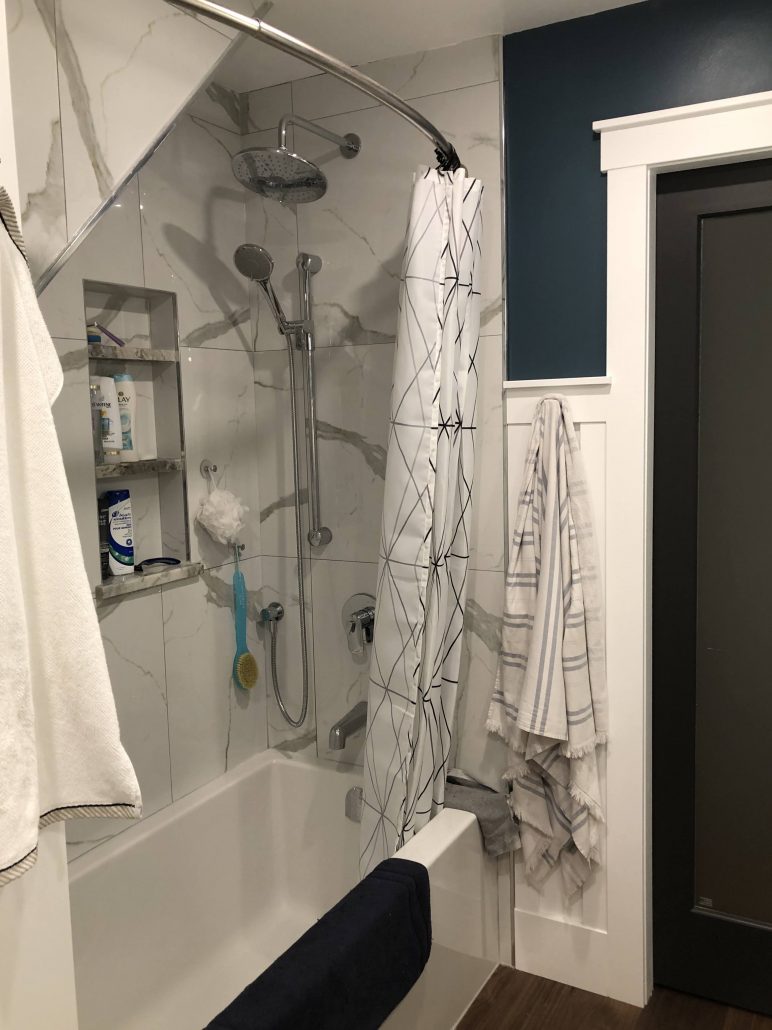 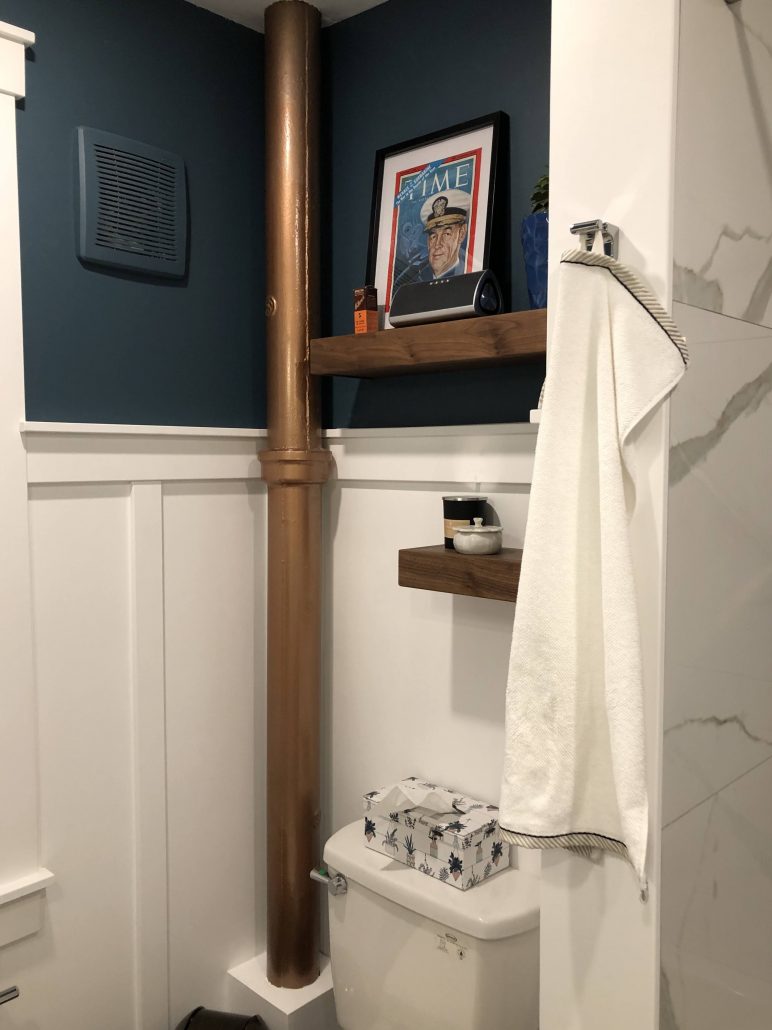 The homeowners love their new fresh space, and can’t wait to tackle their next project in this home.

Desperately need your own glow up for your bathroom? Give us a call! 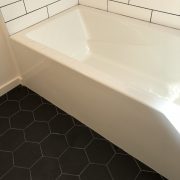 We recently finished up a bathroom update for a customer with clean and modern tastes. This bathroom was in desperate need for a face lift, and the result was amazing! The owner went with a classic black and white bathroom, with a graphic look. This colour combo was ideal for their bathroom, not only because it went with the aesthetic of the house, but also because the accents could easily be changed. 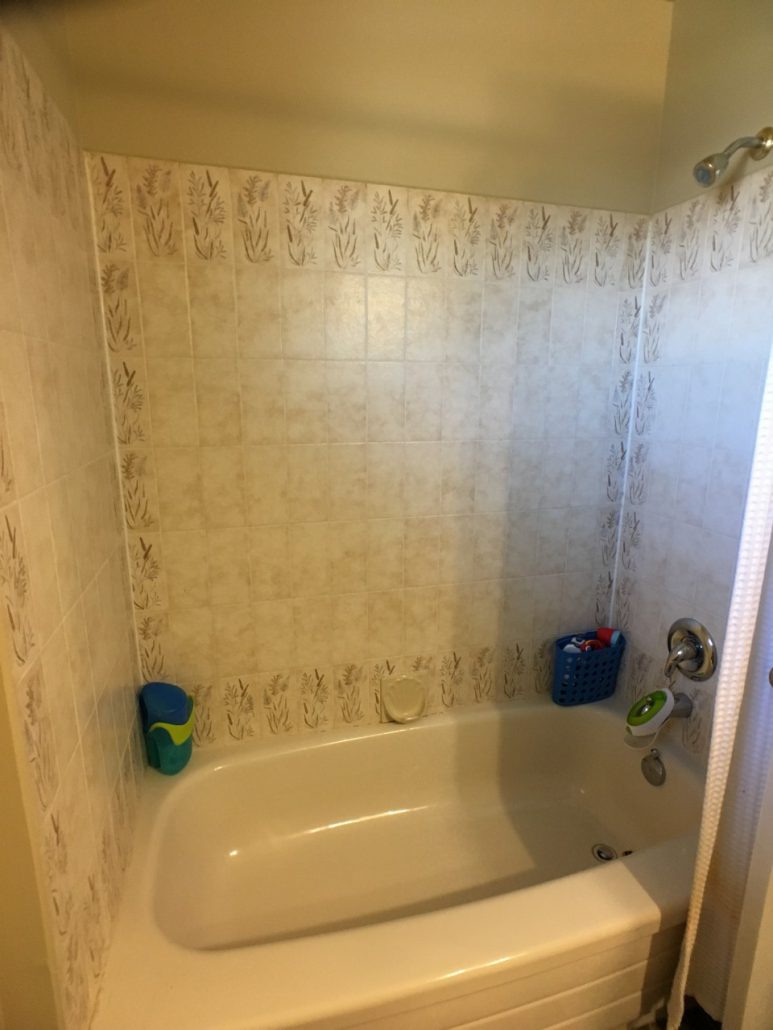 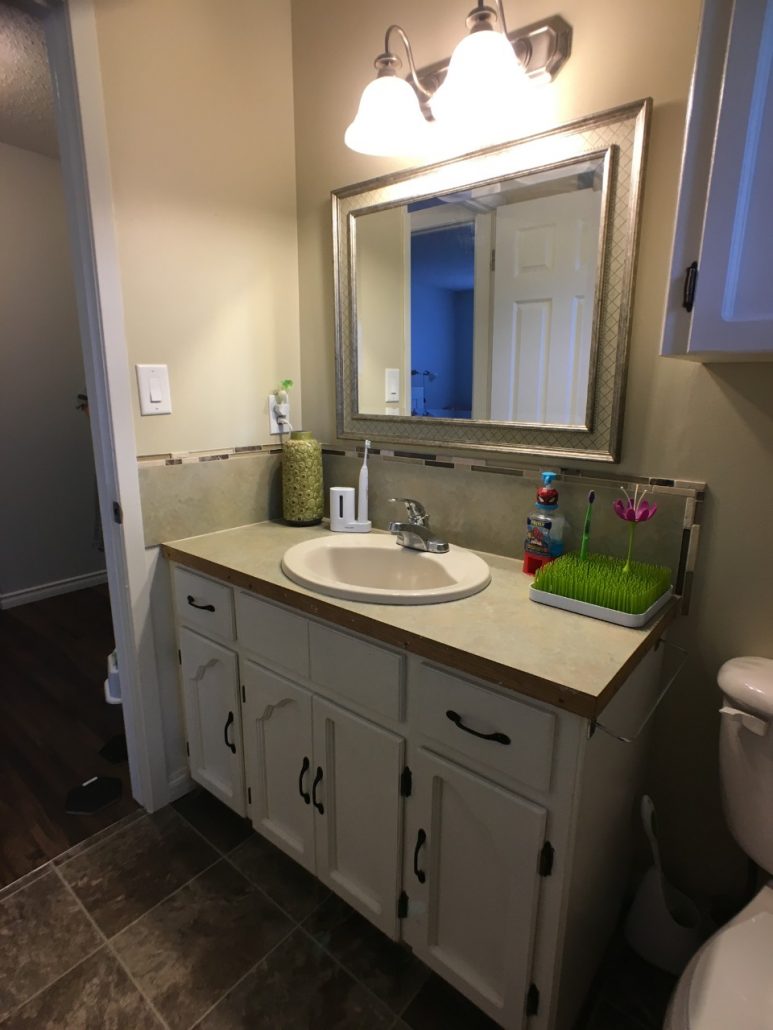 The After: Black and White Bathroom Perfection

Our customer did some research online and found the look she wanted to go after. The flooring and walls made for a very graphic look with high contrast. We pulled up the vinyl sheet, removed the vanity as well as the tub and shower walls. After laying the proper underlay for the floor tile and installing the new tub, we went to work on the shower walls. 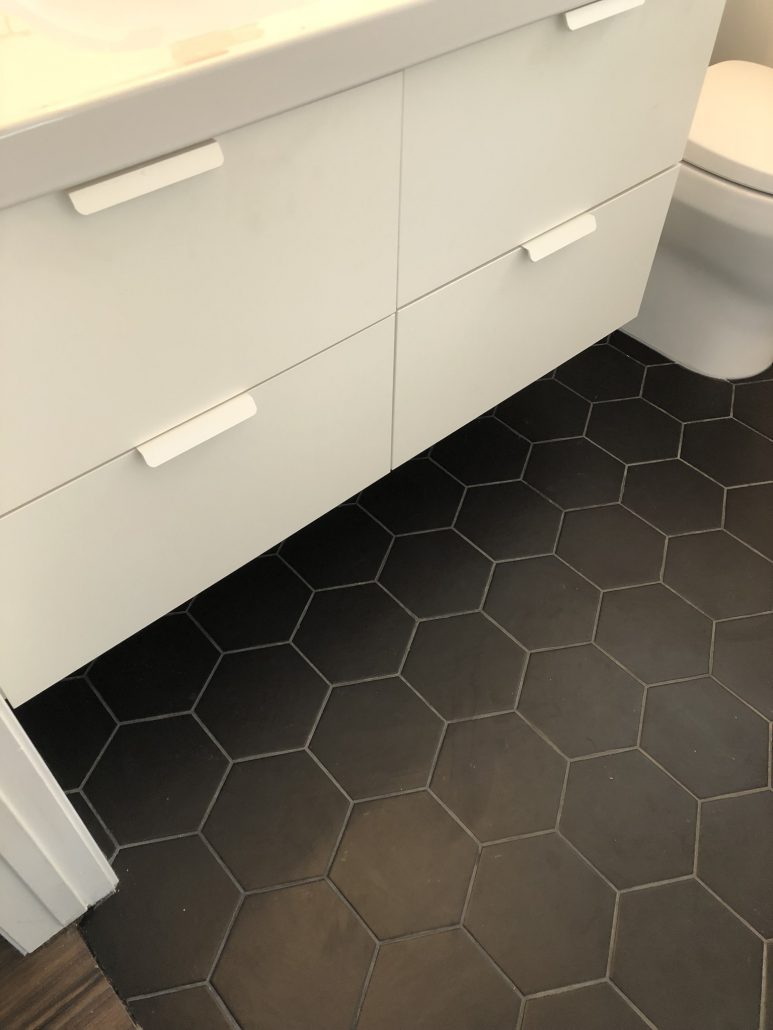 If you’re thinking of going with white subway tile and doing a high contrast grout, you gotta make sure your lines are level! We ALWAYS use a laser level to set our tile, and this install was no different! Now tell me, if this isn’t perfection, then WHAT IS?! 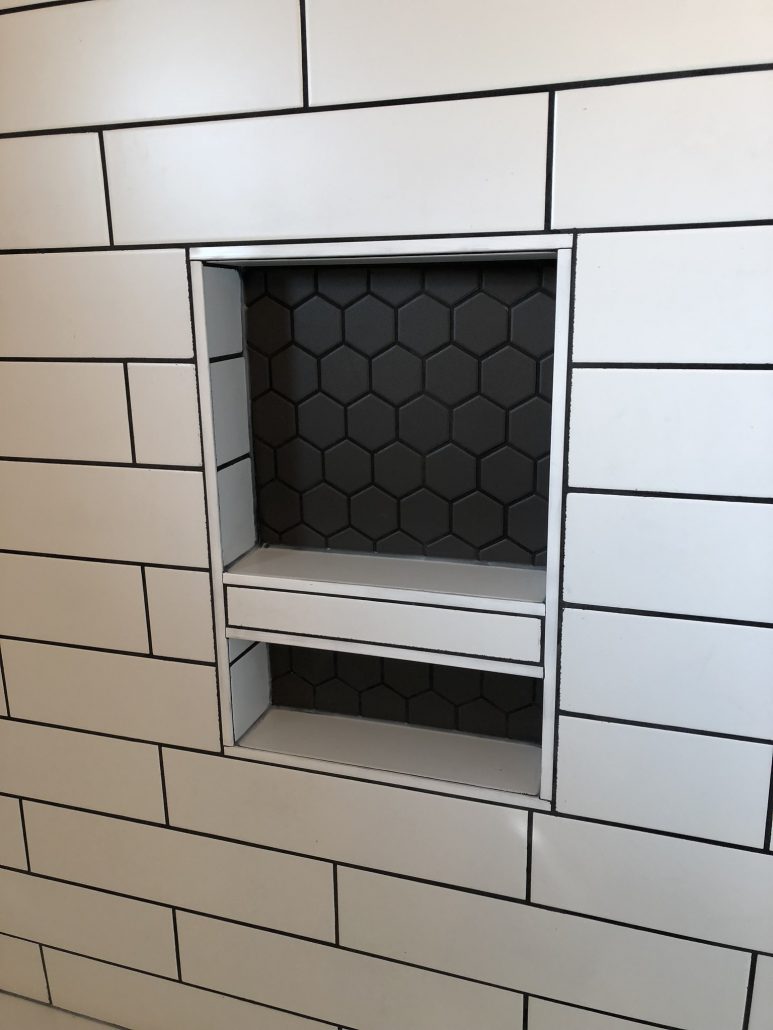 White metal trims were used around the niche. 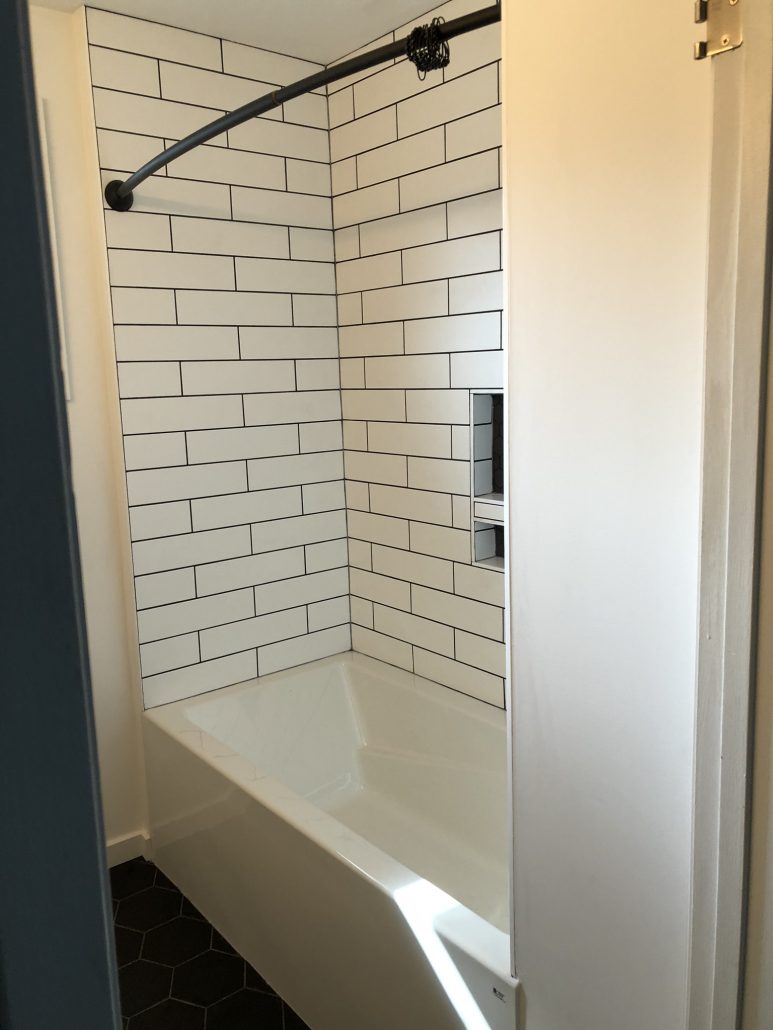 Black metal accents for the shower curtain and plumbing

We like how this bold black and white bathroom turned out, and we hope you do too! Check out our Facebook page for more of our projects, as well as our blog. If you’re looking to renovate, give us a call for a quote!